June 21, 2018
Well we have had another day that hasn’t gone to plan.  I never got though to Korcula marina. So we had to make some decisions. The weather forecast for going back to Korcula was bad.  There were predicted to be 20 knot winds on the nose.  Also going to Korcula would mean going north when we want to go south.  So for all those reasons we gave up on that idea and decided it would be best to make our way to Dubrovnik where Jonnie had the details of an engineer who fixed his bow thruster earlier in the season.

So first Jonnie spoke to the engineer who said he could help us if we contacted him when we got to Dubrovnik. Then we made reservations to go into Dubrovnik marina on Wednesday and Thursday.  So today we would go back to our original plan of going to the island of Mljet where there is supposed to be a lovely bay.  There we could go on a restaurant pontoon if not too crowded or windy so we could manoever without hitting anything, or go on a mooring buoy or anchor.  The later would be the easiest without a bow thruster.

So we set off for Mljet at about 10am.  The weather was not what we expected.  To start with there were light winds of 5 knots or so, but on the nose. Also the sea was rather lumpy. As the day went on it got worse. The wind eventually went just far enough away from dead on that we could put a sail up.  I asked Richard not to put the main up as the sea was rather lumpy; we just put the Genoa up and kept the engine going.  The wind stayed at a force 4 for most of the time but in the last hour or so it built up to 15-17 knots gusting 22 knots!  There were times with the engine on that we were making over 6 knots.  When we finally got to the bay here and turned in, the wind went on the nose and at 20 knots played havoc with the Genoa, whose halyard came loose making it impossible to furl it.  The waters by this time were a bit calmer so Richard was able to go forward and sort the sail out.  Also the wind and rocking of the boat had spilt quite a lot of the main sail out of its bag and that had to be sorted out.

We finally did that and saw the bay with all its restaurants with pontoons.  One restaurant was waving us in, but we really didn’t want to do that without bow thrusters.  So we made for the buoys.  I looked that them and knew it would be difficult in highish winds to pick one up.  They did not have big rings on the top and were rather small to catch.  So we decided to anchor (even though we were told they charge 500Kn for that).  Then another disaster struck.  When I went forward to put the anchor down nothing happened.  The windlass was completely dead.  At first I thought I had turned it off. So I went below to put it back on, but it was on.  No matter how many times I flicked the switch nothing happened.  We can only imagine that when Richard emptied the lockers in the forepeak he must have dislodge a wire going to the windlass. So that too will have to be seen to. 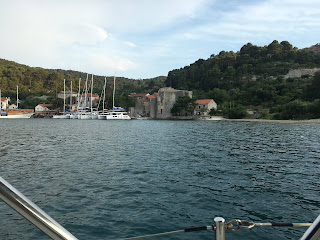 At this stage all that was really left to us was to go back to the mooring buoys.  After two attempts I got a boat hook onto one, but then I couldn’t attach a line while holding it and the boat hook.  Just as we were beginning to despair a man in a rib came by.  This was his franchise and he helped us string up to a suitable buoy.  The only catch is that he is one or the restaurant owners and we are expected to go there for dinner.  Well, it will probably be cheaper than anchoring anyway which he says now costs 600Kn!  Further he will collect us and take us to the restaurant and bring us back. That saves us the worry of rowing in windy conditions or trying to use the outboard for the first time this season.

We would have liked to have a nice afternoon swimming, but the weather really wasn’t up to it when we got here. It was very cloudy and there was even a spit or two of rain.  So we just mooched around and had a nap.  The sun did come out in the late afternoon, which was pleasant.

As promised we did get collected to go to the restaurant and had an interesting dish of wild boar stew with gnocci.  Apparently there are wild boar on this island which are hunted.

So our broken boat has not given us problems tonight.  We just hope this engineer Jonnie found will put us right when we get to Dubrovnik tomorrow.