June 28, 2018
Well our plans to check out of Montenegro didn’t quite go to plan.  We woke up to the alarm at 6am and went to deal with customs and the immigration police at about 6:45.  The customs office appeared to be closed, but when they heard us at the door they opened it and took our piece of paper from the Harbour Master. However when we got to the police they told us they do not open until 7am and we had to bring the boat around to them.  By the time we did all this it was about 8am before we left Bar harbour.

The weather forecast was better but there were still problems.  The wind has dropped but there is nearly a metre swell in the sea.  I took a pill before we set out in the light of this.  With the sea state and the late start we abandoned the plan to go straight to Durres and headed to Shengjin instead.  In fact the journey was not that bad.  The sea settled down after a couple of hours.  The main problem is that it became very cloudy and cold. I had to put on long trousers and a fleece and I still felt a bit cold!  Then as we got to Shengjin it started to rain!  Now I shouldn’t complain about the weather because since we came out we have had very good settled weather for most of the time.  But three days of Bora and cold and rain is not what I expected in the Med at the height of the summer!

We managed to get hold of the agent we used last year and he met us in the harbour.  He has put us on the side of pier where a big dredger seems to be permanently moored (and to which we were rafted out last year).  The wall is a bit high and there are no proper cleats to attach ropes to, but the agent found a way of securing our ropes to lines, metal bits and concrete posts that are here.  The good bit is that with a little effort I can actually get on and off the boat! 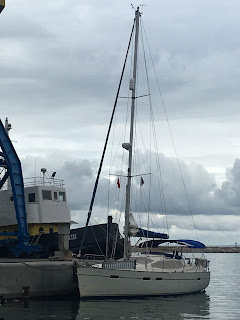 The agent took us to a café to complete the paper work then drove us around the town to show us where things are including a restaurant he recommends.  We finally got back to the boat at 3pm when we had a belated lunch of bread cheese and an apple each.  By now the rain was coming down quite hard so we spend most of the afternoon in the boat.  It was so cold that we put the duvet on the bed.  By about 5:30 or so the rain stopped so we changed and went for a walk around the town before dinner.  The town is rather tatty.  It all seems quite poor.  It has been turned into a rather down market seaside resort. The beach is very odd, with rows of sunbeds rather like in Italy.  However I cannot understand what the beach is made of.  Frankly it looks like mud and earth.  Richard thinks there is some sand mixed in with the earth, but I am not sure.

But dinner was excellent. We had a huge sea bass baked in salt between the two of us.  The fish was really good, moist and tasty.  They also gave us a starter of marinated seafood and melon for afters.  With a bottle of wine we are both well away.  However we did manage to get back on the boat safely.

The weather forecast for tomorrow is more rain, so not sure what we will do.