June 12, 2018
So it is Happy Birthday Richard. I got up very early and went to the shop here in the marina.  It was surprisingly well stocked.  I was able to buy a selection of breakfast pastries and some other stores I had been looking for.

We had breakfast in the cockpit and then did the domestic stuff.  I first sorted out the laundry to take to the laundry lady around the corner. She will have all the sheets towels and underwear washed and dried by this afternoon.  So I have no laundry worries for another three weeks at least.

We then made our way to the other side of town to the fish market.  That was a disappointment.  There was very little there and most of it was sprats (apparently a local specialty).  We could see no live lobsters or crayfish.  We finally found someone in a larger unit and all she had was frozen lobsters and then at a price equivalent to about £75 a kilo.  Richard rejected that.  So no lobster dinner today.

But what we did find was a very good outdoor market selling fruit and veg.  It was the first time in Croatia that I have seen a full range of produce.  I bought cherries, nectarines, green figs and tomatoes.  I even bought an avocado.  Heaven knows what I paid for it, but who cares!  We can now have something other than ham for lunches. There was also a really large well stocked supermarket where I was again able to buy some stores I had been looking for all these weeks.

In the marina store we bought tons of drinks to put in store as we could wheel them down  to the boat in one of their trolleys.  So now for the first time I feel like I have provisioned the boat!

It then started to get incredibly hot so we had a cold drink at the restaurant and managed to use their internet.  The marina has admitted their system is down so we aren’t going crazy when we can’t download anything.

We have been recommended to a restaurant in town and have made reservations for dinner.  So for lunch we drank the champagne and ate the foie gras.  We also made a good dent in the cherries I bought.

The afternoon was incredibly hot. The thermometer in the saloon showed 32C.  So we just lazed around until we thought it was cooling off a bit.  Then we went into town to do the sights.  It really is a super place with buildings for 11thto 17thcentury.  We had a drink in the main square which houses the town hall in a Venetian style house, a huge cathedral with an incredible bell tower and a few palaces. We also had a walk around the ancient castle. 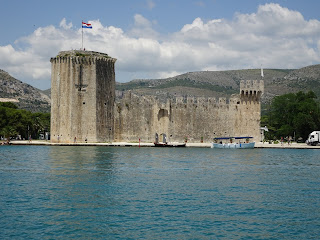 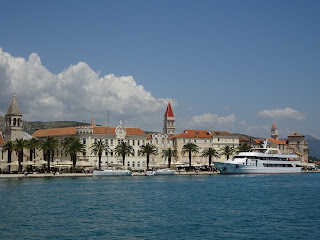 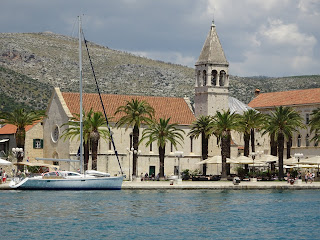 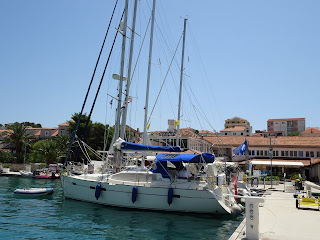 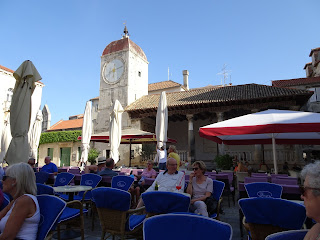 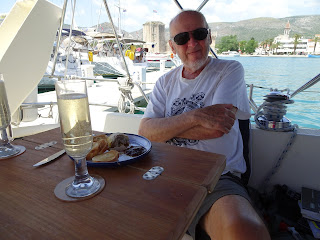 Then dinner.  Richard could have had lobster at the restaurant but it was selling for £100 a kilo, so he gave that a miss.  I am sure we can find a lobster to cook at a halfway reasonable price in the next few weeks.  Then again there is always Steve Hatt’s when we get home!

Now we are trying to cool off the boat so we can get some sleep.  But it has been a good day with a lot accomplished. Richard has even been able to download the Archers.