September 05, 2018
I got lazy yesterday and didn’t do a blog, so here is a catch up.  We decided to leave Lakka early.  There were still an awful lot of boats in the bay.  This morning I counted 40 and there were more yesterday.  On the way out we also noted that a great many of the boats were flying the ensign.  In fact 4 45-50 footers with blue hulls were Brits.

On the way out Richard said he was definitely going to sail today.  But we were let down by the weather forecast again and the wind (what little there was) was on the nose.  Of course that changes as soon as we come in to moor.  We stayed at a beautiful wild place on the mainland called Two Rock Bay so named (would your believe it) because there are two rocks at the entrance. 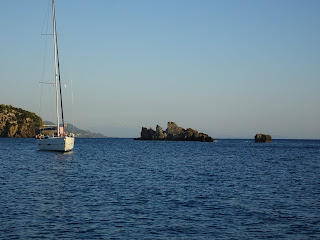 It was lined with cliffs all covered in lush foliage.  There was nothing there except two small beaches and a beach café halfway up one of the cliffs.  When we got there, there were only three other boats which seemed to augur a quite night.

We set the anchor and went for a swim.  Richard used his face mask and snorkel to check on the anchor which he said was not dug in.  We decided to leave it for the time being because we knew the boat would swing and that could make the anchor dig in properly.  Well the tranquillity of the place was a bit disturbed by the arrival of another 4-5 boats.  Still not a crowd. One huge catarmaran had terrible trouble setting his anchor. They tried and failed at least 3 times.  They were also worried about where our anchor was and frankly having turned around so many times we only had a vague notion where it was!  So they sent two of the crew out in the water to look with their face masks. They shouted up to us that our anchor was perfectly set (so Richard was right) and then they finally set their anchor nowhere near ours.

As there really was nothing here we ate on board and then went to bed early.  We want to make an early start tomorrow to get to Lefkas marina where we have booked three nights for free (part of our contract with Gouvia).  The problem is that the weather forecast is for the wind to build up in the afternoon and we would rather not have to cope with a 6-7.