May 30, 2018
The weather has been very settled, hazy sun, no wind and hot.  So we were really sure that we would have a quiet night, despite the port official’s general warnings.  However in the middle of the night the boat began to rock back and forth quite strongly and worst of all the boom kept moving from side to side on the track. I had to wake R up to do something about it.  There seemed no reason for the rocking and we just went back to sleep.

In the morning the weather remained as settled as ever.  So we didn’t even try to put up any sails.  We are headed in the direction of Pula.   We were here last autumn and thought we would try another port just past it.  The attraction of the other port is that they do gas cylinders and we are one week into our last one, so we must get a spare otherwise in a couple of weeks we can only eat cold food!  However, there is a suggestion that this other port has a noisy late night disco.  That put us off and Pula is such a nice town we decided to go in here and hope to get gas here as it is a big town.

Well, there is no gas here.  They suggested we go to the other marina in a taxi to refill our bottle.  We will take the chance of getting some elsewhere. This might be a mistake, but….

We have a fairly leisurely day here.  We get a bit more shopping in to have a few meals on board as we plan to be in anchorages for the next few days.  Again we enjoyed the town and had a nice walk around. 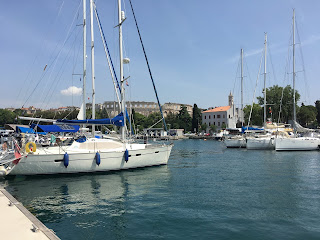 Later this afternoon we got out the dingy to pump it up.  The boat with 7 (maybe 8) Polish men next to us got concerned about us poor old folk man handling the boat and came to help.  They helped us move it off the boat and then helped blow it up as Richard’s foot pump sprung a leak!  Maybe sometimes it is good to be old and feeble!

It has been 30C today and forecast to be the same for the next few days.  Perhaps we will get to go swimming tomorrow!

Oh one change in the Coleman household.  Richard hasn’t shaved for a week.  He says he will grow a beard on this trip.  So far he just looks shaggy. Watch this space.