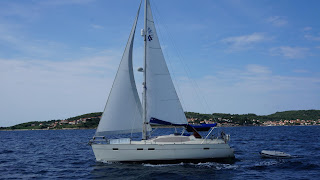 Well, it has been a day of ups and downs.  We got up fairly early with a view to leaving with the Luries at about 9:30.  However we decided to stop for fuel on the way so we left a little early.  When I took up the anchor I was not surprised by the mud and weed, but I was surprised by what I first thought was a log lodged in the anchor.  However when I tried to shift it I discovered that it was a metal rod!  It was entwined in the anchor and we couldn’t shift it even with a boat hook. So we decided to leave it until we stopped at the fuel pontoon.  I wasn’t sure that I would ever get it off, but with an effort I did.  The blooming thing weighed almost as much as the anchor itself!  But having dislodged the thing and go filled up with fuel we set off happily with the Luries just behind us.

At first the wind was quite good and we started to sail really well.  We were going at over 6 knots at one point.  But good things don’t last long.  The wind kept giving up on us.  Between us and Jonnie we competed all day putting the sails up and then taking them down when the wind died.  On the way we ate the avocado I bought at fast expense yesterday and already started to go off.

We got to Zaklopatica at about 3pm.  It seemed empty and there were at least 4 restaurants that were offering free mooring, electricity, water and WIFI.   We were trying to decide where to go when we hit the problem. Despite there being only one or two boats here they all said they were fully booked for the evening. Eventually we found one place which said they could berth one of us and the other could go on a buoy.  The Luries kindly offered to go on the buoy so we started to moor up and that is when the disaster struck.  We managed to get the mooring line caught by the bow thruster!  With the help of one of the staff they got the line untangled from the prop of the bow thruster, but after that it would not work.  It turned on and spun, but had no pull.  We can only think that the safety pin has broken. There is no one here who could repair it and on looking at the instructions it is a major job involving taking the engine for the thruster apart.  So we are up a creek.  The boat is nearly impossible to manoeuver at low speeds without the bow thruster and we will need help to moor up in most places.  It is really a problem and has depressed me terribly.

All afternoon I have been trying to get in touch with Korcula marina to see if they can find someone to repair it.  I can’t get through on the telephone and they haven’t answered my email.  So this is putting the kybosh on our itinerary plans.  All we can think of is to go back to Korcula marina tomorrow and see what they can do for us. If all else fails we will have to make our way somehow to Dubrovnik where the Luries have given us the details of an engineer that sorted out their bow thruster.

We had a swim after the disaster and then met up with the Luries to go to Lastovo, the local village that is supposed to be beautiful.  It was a longish walk up hill, but it is rather lovely.  So after a look around and a cold drink we returned back to the boat.  Finally the restaurant said that the Luries could move on to the pontoon.  So they did that and we had a very nice meal in the restaurant.  We did manage to fill the boat with water and are ready to go.  We just have to fix the bow thruster!