Showing posts from July, 2018
Show All

July 06, 2018
We woke up fairly late, but it made no difference.     The electricians didn’t ring early.     So we made it to the port police before the queues developed and after a delay to get Immigration clearance by email we were checked in and extended our Depka for another year. By the time we did that it was time for an iced coffee and internet, so we went to one of the cafes.  At about midday the electricians rang and said they were on the way.  The news was not good.  They changed the fuse, but they say the pump is so strong it can get fused at any time, but even worse it is nearly burnt out already and could pack up altogether any time.  They recommend we put in a new one, but with the weekend coming they can’t get one before Monday.  The upshot is that the tap in the galley sort of works, but the heads don’t work.  So we have decided that this is the end of sailing for this part of the trip.  We are renting a car later today and will explore the island by land.  We could go out, but
Post a Comment
Read more

July 06, 2018
We were ready for the agent just before 8, but she didn’t come until 8:15.     By then we had finished our breakfast and were ready to leave.   The only problem was that we were well boxed in by other boats.     There was one sailing boat only about 2-3 yards away from our stern and a huge motor boat on our starboard side which meant we couldn’t turn around to get out and going backwards was going to be very tricky.     We presumed that everyone else was told they must go at 8:30, so it would clear, but that wasn’t the case.      The boat behind said he was leaving to go to anchor at 9:30-10:00!     In the end the agent said it was OK for us to stay until 9-9:30 when the boat behind us left.   The boat behind did leave a 9am and we went off in good time.  As we did not have far to go we decided we would try to sail even though there was only a force 3 blowing.  In the end we were able to sail about 2/3rds of the way when the wind turned on the nose. Having had such light winds
Post a Comment
Read more

July 05, 2018
As planned we were up at 5:30 and slipped the mooring just before 6am.     We had a bit of a scare on the way out.     As we left the pontoon and were in the middle of the harbour Richard suddenly rushed below and told me to shut the engine off.     It turned out the no water was getting through the engine and it would shortly overheat.     But a crisis was averted.     It was caused by Richard clearing out the filter last night and he hadn’t quite put it back properly.     A small adjustment and we were on our way. The weather was odd.  At first we thought it had just turned very cloudy, but it turned out to be a sea mist which followed us for about ¾ of the way here.  The visibility was down to 3-5 miles and it was quite cool.  But by 1pm that had changed and the sun came out and it got very hot and sticky.  We had a bit of wind from behind so Richard put up the sails and we motor sailed giving us another half a knot in speed to reduce the time of the journey. We had made co
Post a Comment
Read more 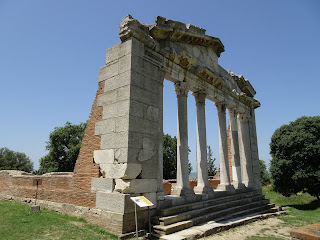 We got up at 8:30 and got ready to go out.     It is an extremely hot and sunny day.     We met our taxi driver exactly at 10 and off we went.     We are going to an archeological site about an hours drive away called Apollonia.     We were surprised to be driven back almost half way to Durres to this place.   The site is very large, but barely excavated.  Much of what there is has been reconstructed because the town was destroyed in an earthquake about 1800 years ago!  It really was interesting, but very badly presented.  There were signs about the ruins, but half of them were missing.  There was no hand out map of the site and although there were posters with maps they were pretty much unintelligible.  We tried to buy a guidebook, but the shop had no change!  Despite this we had a fairly good look around and did a lot of walking in the noonday sun.  We missed one or two of the ruins because there were no signs directing us to them.  The museum was quite good with lots of G
Post a Comment
Read more

July 03, 2018
The agent was as good as his word and he turned up on the stroke of 6am to give us our paperwork to proceed.   So we were off just after 6am.   The weather turned out to be more or less just as predicted, at least to start with.     The sun was bright and the sea was calm.     There was little wind to start with.     Then after about an hour the wind which had been on the nose went a bit around and strengthened to 8-9knots.     So we put up the genoa to help us go along faster.     We were making nearly 6 knots which was good for about 3 hours.     We hoped that would keep up while we were on the same bearing for 20 miles, but the wind turned around and we had to just motor. We were both very tired after an early morning start so we gave each other a 2 hour interval to have a nap. By noon the wind started to increase as predicted but it remained on the nose.  It then got much stronger going up to the expected 15-20 knots. By 2pm we were able to put the genoa up and get 6 knots spe
Post a Comment
Read more

July 01, 2018
We spoke to the agent in the morning who said we were OK to leave the boat here all day and go into Tirana.   We got rough directions on where to find the bus to Tirana and after asking a few people we found a square with the bus waiting.     The journey took just over half an hour.     The only problem was that the bus station it went to was way out of town.     There was apparently another bus that would take us into the centre, but for less than £5 we decided to take a taxi.     Well, he said he was a taxi, but he was just a freelance driver of a wreck. Despite that we got into town promptly and when the driver couldn’t understand where Richard was telling him he wanted to go, he phoned his daughter who spoke English to help! We really had no idea where to go. Richard remembered that the hotel he stayed in when he worked here 20 years ago was on the main street, so we went to that hotel.  There we had a nice iced coffee and got a map which helped a tiny bit, but not much.
Post a Comment
Read more
More posts