There was quite a lot of wind in the night, but we had no particular problems and had a reasonable night’s sleep.  The wind was still a bit brisk when we got up, but we decided that was a good thing as we plan to go up the hill to the fortress.

So at about 9:30 we started into town to walk to the fortress.  I was tired before we even got to the proper entrance, having to climb up to the last houses in the town.  I have no idea how far or how high we walked, but it was very high.  At one stage I nearly chickened out. We took a wrong path and found ourselves at a very steep stairway that I knew I would never be able to get down safely.  But when we found the right path I struggled on and we did get to the top.  The tourist office said it was a 45 minute walk, but it took us more like one and a half hours.  But we made it and actually beat a young Russian couple to the top, much to their dismay!  I was worried that the journey down would be worse because we would be tired and the old knees don’t like down hill.  But that turned out to be fine.  So I am feeling very pleased with myself.  We shall see how stiff we are in the morning. 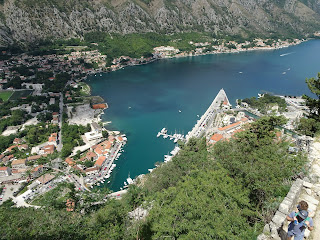 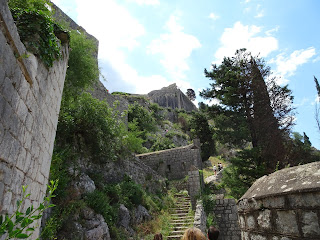 When we got back to the town we found the market was going even though it is Sunday.  I found the stall that sold fresh wild mushrooms and bought 350gm of mixed chanterelles and porcini.  The smell is divine and I am really looking forward to eating them with our steaks for dinner.

After the exertions of the morning we had a very quiet afternoon.  We had the people on the boat next to us over for drinks in the evening. They are CA members and have been in the Ionian for several years and are coming up to Croatia for a change. It made a very enjoyable evening.

The mushrooms and steaks were great for dinner.  We are now planning the next few days.  The problem is that the weather forecasts are contradictory, some suggesting really strong winds particularly overnight.  Richard is being optimistic and has decided not to run for Bar.  So we shall see.